The National Federation of State High School Associations, best known for setting standards for governing interscholastic high school athletics, also promotes performing arts activities, such as theatre, speech, debate, and music. Accordingly, its Heart of the Arts Award recognizes individuals or groups who exemplify the ideals of the positive heart of the arts that represent the core mission of education-based activities. The 2020 honoree from Wisconsin is J.I. Case High School in Racine.

Case Eagle Theater, (@case_theater) Troupe 8259 in the International Thespian Society of the Educational Theatre Association, produces several plays a year, participates in the Wisconsin High School Forensic Association’s annual one-act contest series, and conducts interactive workshops facilitated by high school students. Their performance in interscholastic one-act and Thespian festivals derives from student-written works centering on social justice issues. The group has been recognized by the Wisconsin Governor’s Office, the Educational Theatre Association, as well as a host of other community and theatre groups for their Break the Hate Habit workshop, an anti-bullying program using interactive theater and team-building techniques to reshape community culture. In 2015, they won every award at the Wisconsin High School Theatre Festival, for their provocative work, “#DarkSideOfTheRainbow,” a play about transgender teens and the struggles they face. Each year Case High School has participated in the aforementioned state theatre festival, they win at least one Outstanding Acting Award, and often place in the Tech Challenge (previously, “Tech Olympics”). 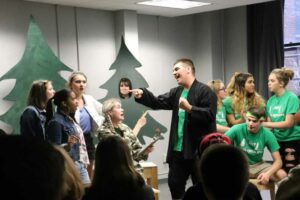 In October 2019, Case Eagle Theater began the interscholastic one-act season in Wisconsin, performing their devised work, “Comedy Attack,” about “radically different perspectives of race, relationships, and social circumstances” faced by young people at summer camp, “Campakneeslappa.” Wrote faculty director Nancy Gibson on behalf of her students, “The students selected this play based on issues of undocumented people in our country.  They felt that the individual stories in the script and the plot would be a strong platform for discussion after their public performances.  They also hope that the play will perform at State and offer food for thought for students in Wisconsin who do not have access to diverse populations.”

When their one-act did not advance from the sectional level to State, they submitted a proposal to present a workshop at the Wisconsin High School Theatre Festival based on their play, entitled, “Improv in Action – Engaging Audiences Beyond the Fourth Wall.” The workshop description was: “Step out of the audience and into an original show based on current challenges teens face, advancing improv skills within the context of a play. Use techniques to engage audiences with progressive plays and offer a dynamic way for your community to address issues. Also engage in theater skill-building techniques that focus on group engagement and participation.”

The workshop was so well-received, the group spontaneously repeated it at the festival so other students would have an opportunity to engage with them on these issues.

That is Case Eagle Theater. Performance is merely a means to spread their message of hope, humanity, and harmony, exemplifying the heart this group shares with their peers from other schools. Moreover, this school is situated in one of the most economically disadvantaged school districts in the state, and uses that as a strength in their efforts to bring diverse groups together. Despite sometimes not advancing to the state level with their student-written works – often, because decidedly “old school” adjudicators cannot relate to the themes, topics, and hard-hitting nature of what students perform, these students, and director Nancy Gibson constantly hold their heads high, and value the message they’re spreading over any kinds of successes and accolades (though they have earned those, too).